The following article was a blog post written by Ride Velo in November 2015:

“Calais Bicycle Aid is very much a platform for asking: is there a compassion and keenness to support those in need within the cycling community in the UK? And is there a genuine need for bicycles in aid situations connected to the refugee crisis?”

Unlike many of us who just watch the humanitarian crisis unfolding on our TV screens, Dan from Populate Co-operative actually got up and did something about it. He said, “I was keen to see for myself the reality and so when a group of friends in London organised the Critical Mass to Calais bike ride I had a trip to join, to gain my first experiences.”

From there, Dan was determined to do something to help the refugees and set up Calais Bicycle Aid in September. The project receives bicycle donations including children’s bikes, parts, tools and spares which are then shipped to Calais and used to improve the lives of, not only the refugees, but also the volunteers over there. 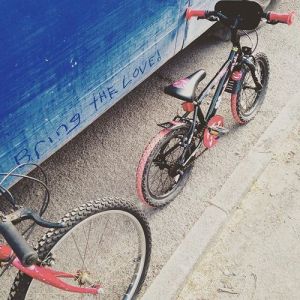 “Bikes are so often something that people have in their sheds, unloved, and so I knew there was an abundance of potential donations out there. The support we got from community bike projects was incredible.”

Calais Bicycle Aid went from nothing to raising their target of £820 on Crowdfunder in little over a month. The organisation has received offers of help, aid and more than 80 bicycles from people all over the UK including Bicycle Links and Norwich Bicycle Repair Co-op.

Dan and his team of volunteers have just returned from their second mission to France; this time they took out a whole bunch of children’s bikes as the women’s centre in the camp has a long list of refugee kids who want a bike.

They also took out three ex-postal bikes for charity workers in ‘the jungle’. One of those was Abby from aid-agency, Hands International, whose job it is to vaccinate refugees. Abby used to work as a cycle paramedic and the new bike has revolutionised her working day in the camp. “She is an incredible woman who seems to be called upon for any illness or injury. She was super excited to have a bike to get around on.” 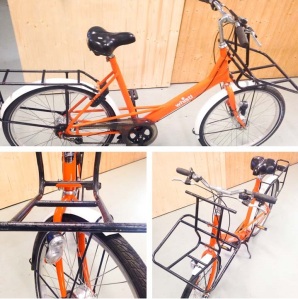 “Ashram Kitchen feeds 1,000 people a day, with the food prep done by both refugees and volunteers within a marquee at the camp. They’re always sharing ingredients with other kitchens in the camp and moving huge vats of stew around ‘the jungle’, so we left a bike with them too. So many of the bikes have no brakes, flat tyres and major faults, but those cycling them always seem to be smiling.”

Life for the refugees is exacerbated by the conditions and position of the camp. It’s located on the outskirts of Calais, which is a good 5 mile round trip from the town centre, shops, services and key places like the office where French asylum applicants require regular visits. Combine the reality of this 5 mile round trip, with the challenges of keeping your few clothes and shoes dry in a muddy refugee camp which is prone to flooding, then life becomes a much bigger challenge. Walking 5 miles is fair distance for most of us. Walking 5 miles in wet shoes and socks, when you can’t get warm and the winter weather is closing in is a whole lot worse. 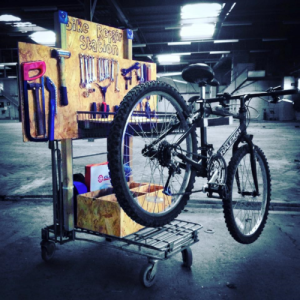 The bikes are also hugely useful for carrying aid supplies. Donations of food, wood, clothes and bed linen being carried by bike are regular sights in the camp. As the winter weather arrives, sourcing wood to burn for warmth will become an increasingly important daily task. So far, the Calais Bicycle Aid has delivered and processed roughly 40 bikes for distribution. Dan is planning two shorter trips to Calais in December and January to be funded by auctioning some of the donations they have received. I asked Dan what the future held for the fledgling aid campaign. Dan told me:

“We’re keen to build Calais Bicycle Aid through the growth of a network of partners, supporters and creative people with ideas, so we’d like to start that conversation. We’re being approached by folk who know of other European humanitarian crisis situations where bicycles would be a valuable aid item, so it feels like there’s an ongoing need.” 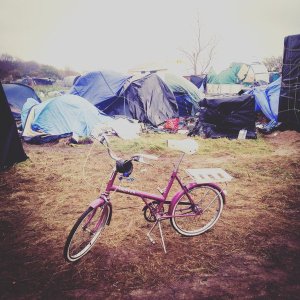 What Populate are trying to do is to feel the depth of compassion within the cycling community and its capacity to support further bicycle aid. They would like to create events in cities up and down the country to engage cyclists and promote their cause. “I guess all we can ask is, if this stirs something inside folk that they get in touch.” When I found out about Calais Bicycle Aid, I did just that. It would be great if you could too, or pass this on to a local group who may be interested in joining forces, or creating events with Calais Bicycle Aid.

Populate Co-operative is a community owned organisation creating and facilitating events in UK cities. We actively deliver programmes of events and develop tools and resources, but also mentor and support artists, creatives and community organisations to deliver their own successful events. We are passionate about bringing places to life with people, whether those places are parks, city squares, libraries, cafes or art galleries. View all posts by populatecoop